In the Pacific Northwest, the Swedish Culture is represented through the Swedish Vasa Order, an organization that was founded in 1896. The Spokane Vasa order was founded in 1908. In 2008 the club celebrated their 100 year anniversary, a picture of the celebration can be found above. The organization was named after Gustav Vasa who liberated the country in the 15th century and became the first King of modern Sweden.

The organization was originally created as a benefit fraternal society for Swedish immigrants to the United States that provided a small income to members during sickness, and a death benefit that was used to cover final expenses. Today the organization serves as a way for members to share their heritage with their communities!

The Vasa Order welcomes men and women over age 14 of Nordic roots, their spouses, or anyone of good moral character who would like to learn more about Sweden and share their Nordic Heritage. Nordic roots are defined as anyone who identifies with Swedish, Norwegian, Danish, Finnish, or Icelandic lineage.

The Swedish Vasa Order observes and celebrates many special dates including Midsommer and Luciafest!

The Swedish Vasa Order of the Spokane Area is called “North Star #145”. There are usually monthly meetings on the 3rd Saturday of the month at noon at Country Homes Christian Church, 8415 N Wall Street, Spokane, WA 99208. With the current circumstances meetings have been virtual.

St Lucia was a young Christian girl who was martyred, killed for her faith, in 304. The most common story told about St Lucia is that she would secretly bring food to the persecuted Christians in Rome, who lived in hiding in the catacombs under the city. She would wear candles on her head, so she had both her hands free to carry things. Lucy means ‘light’ so this is a very appropriate name.

Luciafest is now celebrated by a girl dressing in a white dress and a red sash around her waist with a crown of candles on her head. Children over 12 will sometimes use real candles!

This is a tradition that has carried on in the United States! The picture to the left has been taken from the Swedish Vasa Order North Star #145 from Spokane, Washington! 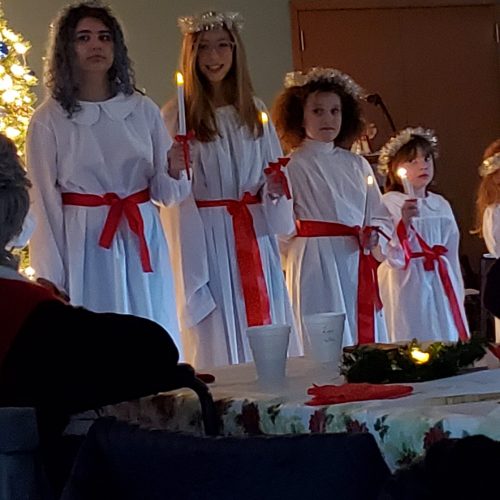 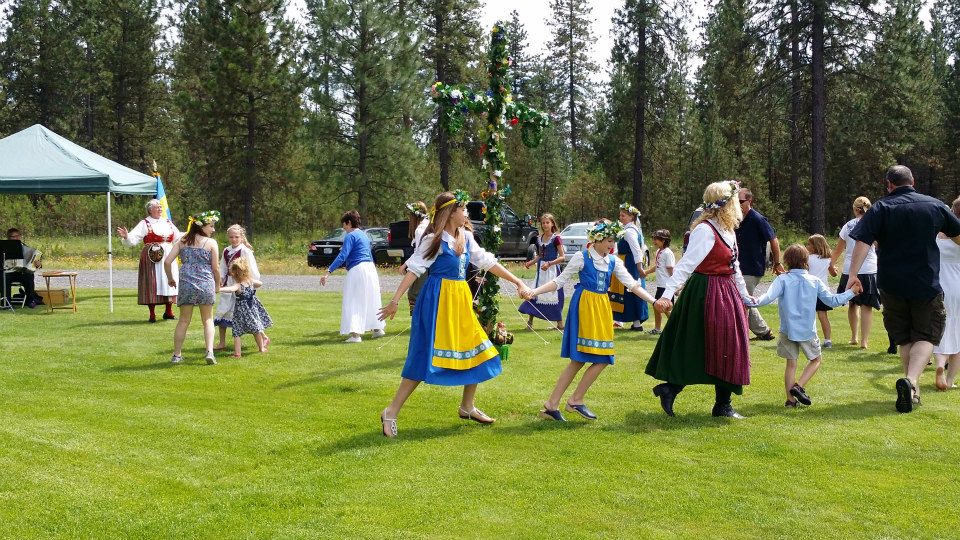 Another special date that the Swedish culture celebrates is Midsommer. Midsommer takes place in June and during the summer solstice, the longest day of the year. On this day a maypole is created and raised. People then gather round the pole to dance and sing!

The picture to the right is from Midsommer as celebrated in Spokane, Washington!

To the right are members of the Swedish Vasa Order of American North Star Lodge #145! Some of these members are dressed in traditional dress. They have additionally brought some traditional holiday decorations that are showcased in front of them!

This group will be representing the Swedish culture in Northwest Winterfest this year! 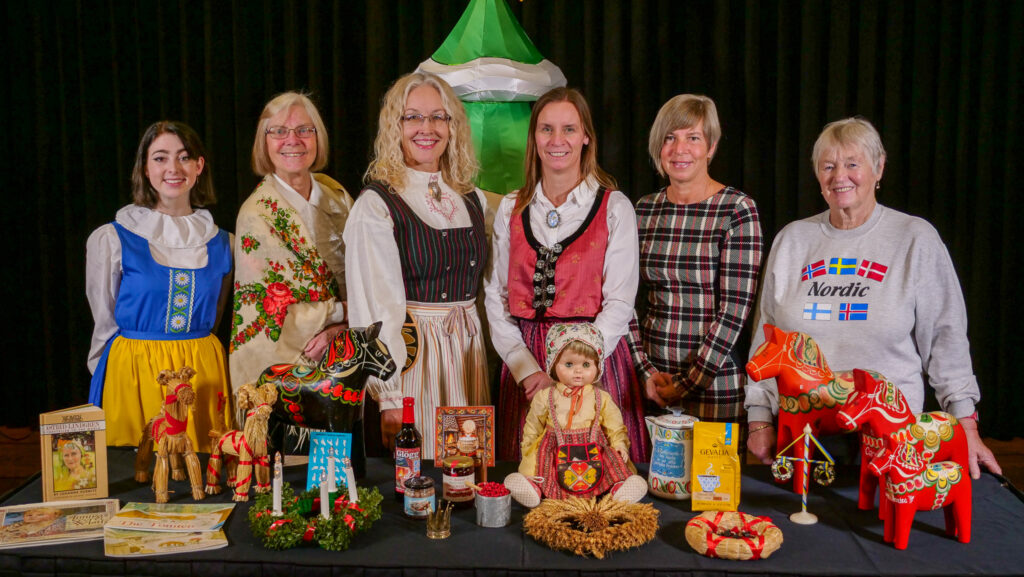 Learn More About the Culture of Sweden and The Swedish Vasa 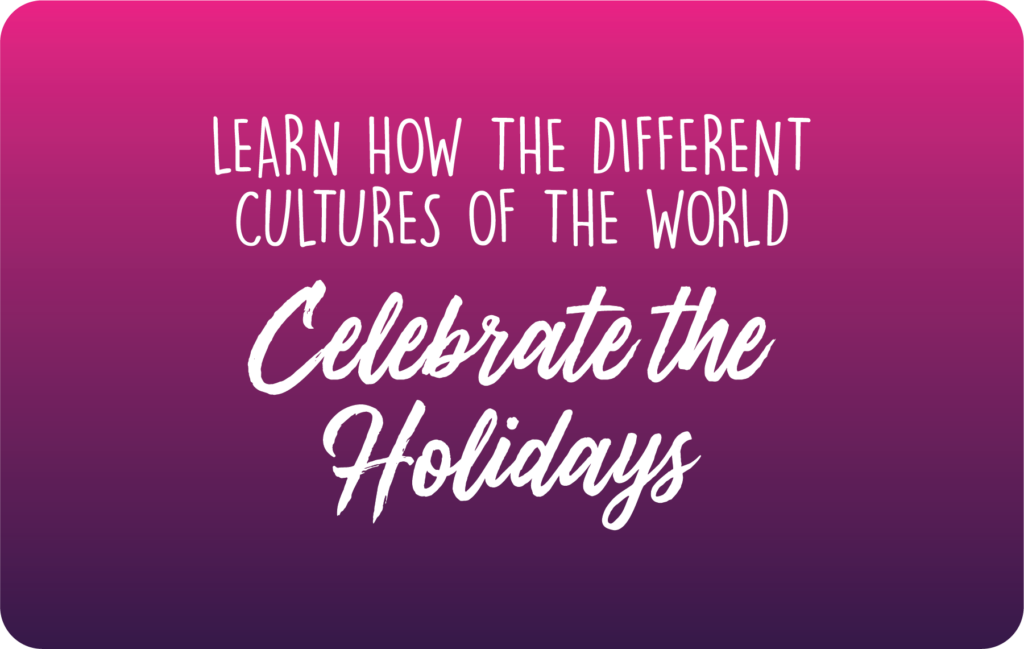 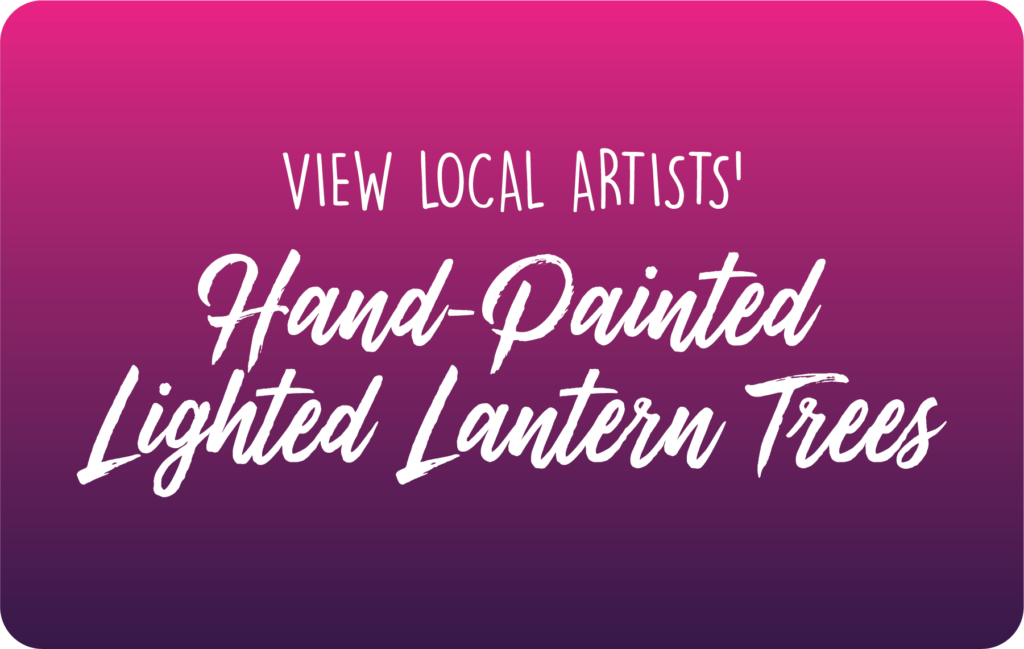